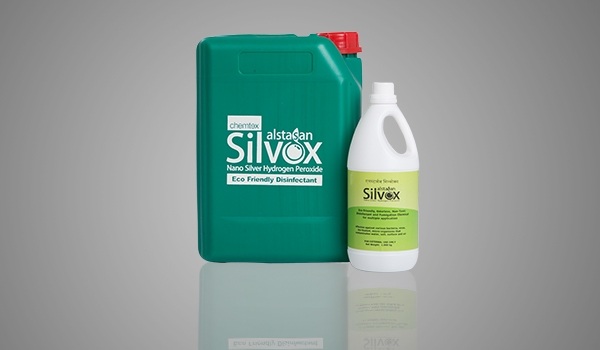 Oligo-Dynamic Function
Silver shows oligo-dynamic effect or toxicity on bacterial cells even in relatively low concentrations. Silver ions denature enzymes of the target cell or organism by binding to reactive groups, resulting in their precipitation and inactivation. Silver inactivates enzymes by reacting with the thiol groups to form silver sulphides.

Stabilizer function
Hydrogen Peroxide is not stable which means that it decomposes to oxygen and water. To solve this problem silver is added to hydrogen peroxide as stabilizer. This stabilizer prevents the slow decomposition of the hydrogen peroxide. The Ag2+ ions keep O2- ions.

Activator Function
The silver performs as an activator. The singularity of this silver activator is that it only activates the peroxide when it is exposed to biofoulants. In contact with microbes the silver loses its stabilizing function and activates to release nascent oxygen to oxidize the exposed microbes. When all bacteria have been oxidized by the generated active oxygen compounds, the silver acts as stabilizer for the remaining and non-reacted oxygen.

ALSTASAN SILVOX is used in various applications for disinfection of air, water, soil and surface. Please refer your CSL representative to ask for application specific MOU (Method of Use) card.

Proper human safety products such as splash goggles, lab coat, vapour respirator, NIOSH approved gloves and boots should be worn while handling and applying chemicals. Splashes on the skin should be washed off with water immediately. In case of splashing into the eyes, flush them with fresh water and obtain medical attention. Should not be injected.

ALSTASAN SILVOX is an oxidizing product and should be stored in original vented containers, away from heat, direct sunlight and combustibles. Store in a cool and dry place. Please refer label and SDS for details.

We offer a wide variety of products. Download our complete catalog for a complete overview.

Download PDF

×
We use cookies to ensure that we give you the best experience on our website. If you continue to use this site we will assume that you are happy with it.OkNoPrivacy policy